Think this looks amateur? You’d be right. I did it in Paint, just messing about for a jokey post earlier this year (click pic for link)

This might sound odd to some people: perhaps it is – you can let me know if that’s the case. But more often than not, it’s the typography on a book’s cover which tells me whether or not I want to read it.

By this I mean, it’s going to be the reason I sometimes think that the cover, and therefore the book, are an amateur – possibly even sloppy – effort.

Self-Published Authors: Oh, for the love of Blog. It’s her again.

Self-Published Authors: Please shut up. Or rather, tell us why you’re bothering us now. What are you giving out about this time?

Tara: Erm, the fonts used on your book covers, actually.

Self-Published Authors: Figures. What next? Our names?

Self-Published Authors [to each other]: Never stopped her before.

But bear with me. Have you ever seen a book cover and thought: Right, I bet a besquillion squids that’s self-published…?

Or    It looks like they did the cover themselves. I wonder whether they got it edited? Probably not.

If it were my book, I wouldn’t want anyone to judge from 1 mere glance at the cover whether it was self-published or not. And yet, one of the most common comments I got during the examination of what makes people buy self-published books – and what turns them off buying same – was a “cheap-looking” or ” amateurish” book cover.

For me, the biggest screaming sign of a poor cover, is the font used for the title and the author’s name. All those little decisions made regarding font type; serif or sans serif; size of title versus size of author’s name; colour; contrast to the background – these are what can make a book fall before even entering the final furlong.

I don’t often post content I haven’t made myself, but this infographic caught my eye some time ago and I was rendered gob-dawed by its most awesome and beautiful brilliance. It’s not specifically about book covers, but it’s useful, and everyone who has any hand at all in the design of their own book cover should look at this: 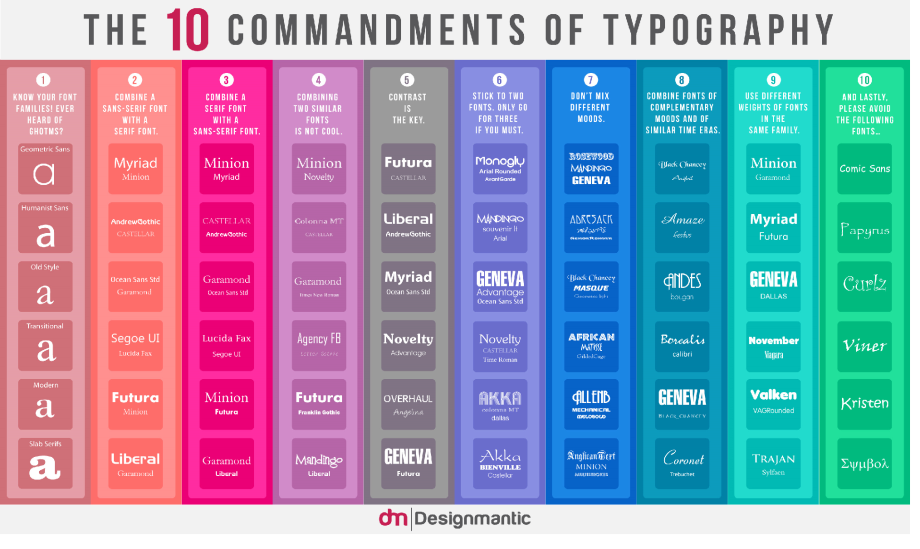 Source: For full size and effect, off you go to http://www.designmantic.com/blog/infographics/ten-commandments-of-typography

This is by no means comprehensive (take a look at their website for narky comments from other graphic designers who believe it’s flawed in a hundred different ways). But still, there are very simple rules which book cover designers and other graphic designers know backwards. Those of us who aren’t aware of them might not think that they’re important. After all, we writers are creative people. Why can’t we just play around and put out whatever we think looks good? We’re avid readers, surely we know what we like?

I don’t pretend to know the secret to a good cover. And yet, when typography rules are broken, my brain somehow registers immediately that things don’t look right. I am reminded of local poetry anthologies from the 1980s; those annual circulars Great-Aunt McSmarmy sent at Christmas when she was the only person we knew with a word processor; and that book which was published by the school year above me as a project. It looks, quite simply, unfinished. It looks cheap. And this is before you even get to the blurb.

I’m not going to go into arguments here about how much it costs to get a cover designer, let alone an editor. I know it costs money. But you are also asking people to spend their money on your book. And as far as I’m concerned, there is no excuse whatsoever for putting out an unfinished product, in any industry.

Besides, there are very few cases where you’ll get away with cheap packaging and branding. I might not care about the packaging of a plant I buy for the garden, or a cupcake I’ve just sampled. But by Blog, do I care about it on a book!

← I Have No Pride Or Shame. VOTE FOR ME
Tark And Mara Visit The Irish Riviera →

52 comments for “Authors! Your Cover Font Is Killing Your Book”