I found myself saying something utterly woeful the other day. I was describing a book I’d read to a friend. “I think it’s for men,” I said to her. “I mean, it was good. But it didn’t grab me. So I think it was probably written for men.”

To my credit, I whacked myself in the face with a large fresh haddock after I said this, because it was an uncommonly stupid thing to say for someone who climbs on to a soapbox 48% of the time about how labels such as “women’s fiction” should be burned at the stake.

Unfortunately, it was also true.

The book was supposed to be funny. In fact, the reason I’d bought it, apart from the fact that it had been nominated for multiple prizes and won a few very serious ones, was because of the cover quote from the Irish Times. “So good,” it said. “So good, so funny, and so sad.”

That’s a book for me, says I to myself, I says. Funny and sad and good. That’s totally me, says I. 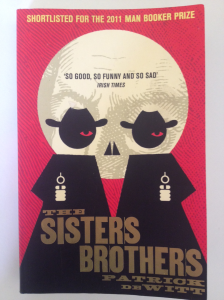 Anyway, I had just finished reading it. It was The Sisters Brothers, by Patrick DeWitt. And it was good. Well, good-ish, but not great. The funny bits, it seemed to me, generally concerned horrific injuries, a walking corpse of a horse, general violence, and drunkenness (the hungover part, at least). Which is all very well, but while it might raise a titter from some, I found my inner voice behaving like a pedantic German stereotype, with such thoughts as “oh yes, I see what he did there,” and “Ah. This part is humorous, because it is technically comical that his leg is falling off.”

A similar thing happened with Howard Jacobson’s The Finkler Question, another apparently marvellous example of literary humour. My reaction was nine parts “I see that this is meant to be funny,” and one part “I don’t get it”. It was, literally, no parts “Hahaha”.

This made me wonder about what is funny to men and women. Are our funny bones wired differently? Does the female pelvis vibrate to a different frequency of humour? Is, for example, slapstick and injury-based violence more humorous to men than to women?

Most Irish people I know who like performance comedy in general, and stand-up in particular, like the same comedians, no matter their gender, or the gender of the comedian. A standard Irish comedy audience doesn’t appear to favour one sex over another. But when it comes to films, the audience is split. Is it the same with books – or to be more specific, that rare breed of literary fiction which is supposed to be funny?

The Hangover was hilarious, apparently. But some of us had to be told that, and we were also told that the reason we didn’t get how much of a rip-roaring, vomitous laugh it was, was because it was a lad’s movie. Bridesmaids was supposed to bridge the great divide, but it was harder to get men to go and see it, because it was a woman’s comedy, and so, couldn’t be funny.

As someone who doesn’t set out to write funny, but has sometimes fooled readers into thinking that her writing can raise the odd ‘lol’, I find that thinking about what is funny, generally kills the joke.

Recently, this has become more of a problem. What I’m writing at the moment should be for a general audience; community humour, so to speak, about people in general, and small towns in particular. If I were marketing it, I would totally say it was non gender-specific.

But I’m not marketing it, I’m still trying to write it. And I have a niggling feeling sometimes that it might be woman funny, not man funny, no matter how much I’d like to bridge the great divide. And I don’t think I can change that, because sometimes I come across a book like The Sisters Brothers, and I find myself thinking that there is a certain type of literary humour for men, and I disassociate myself from it.

Whilst I will continue on fighting for the right to not categorise what I write as women’s fiction, I’m afraid I might lose this other battle. I’m afraid that funny might be a gender issue, when it comes to literary fiction at least. But let it be known that I am open to someone poking fun at the notion. Or, for that matter, at me.

What do you think? Is there a gender divide when it comes to literary humour – or is it a more cultural, geographic thing?

43 comments for “Is Funny A Gender Thing?”