Back to business, ladies and gentlesirs.

Today I want to look at who in the blockbusting big leagues was publishing in 2014, and what the market looked like when they did.

I’ve been wading around in the book data again, my hand on my chin, occasionally contorting myself into an awkward (and poor) imitation of Rodin’s Thinker.

“Are book sales greater in June or July… or is it November… wait, is that a ten euro note?! Which reminds me, I must get toilet paper” Pic: musee-rodin.fr

I’ve spent some time prodding numbers into spreadsheets, sorting them into tables, poking them a bit (but not so much that they lose their shape, because they don’t like that), throwing them into graphs and taking them back out again.

Again, the idea here is to look at Top Ten Fiction Bestsellers in the UK – according to Nielsen and the Sunday Times – as an indicator of what’s going on in the market at large. It’s not perfect. But it can be a little bit pretty. And hopefully it can help authors to plan the best time to release their books, be they fiction or non-fiction.

The most bankable titles of the year – i.e. from the biggest authors – are generally released first either in the pre-Christmas period of October/November, or June/July in “hardback” format (or more probably, that god-awful massive trade paperback size which is impossible to read in bed and gives you scoliosis, if you try to carry it in your handbag).

Although the pre-Christmas market is admittedly bigger (and we dealt with why it is not for indie authors here), let’s have a look at the biggest titles (those which made it into the Bestseller List) released in June and July of 2014. 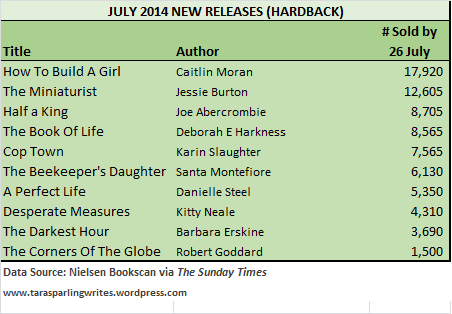 Although bang in the middle of summer holiday season, you would think that this is a strange time to release a hardback: after all, hardbacks are hardly the preferred reading formats for holidaymakers, due to their size. For instance, they are painful to read on sun-loungers.

However, the mass-release of hardback blockbusters in June and July could be because a summer hardback release can allow for a paperback release – and thus a 2nd sales spike – before Christmas.

It used to take up to a year for paperbacks to come out, but the growing popularity of E-books has narrowed the release period between hardbacks and paperbacks, because E-books are released at the same time as the first hardback releases. (Sadly, E-book data is not included here. I wish I could. But they won’t give it to me. [sob])

So, Could I Get To The Point, Please?

Let’s revisit this book sales graph for one moment.

June is big for paperbacks, October for hardbacks

June and July are very noisy months in the book market – particularly fiction – when very very big authors are shouting very very loudly about their guaranteed bestsellers. Also, newspapers are looking for content to write about, and book reviews and interviews with famous authors come in dead handy.

There are quieter times of year for an indie author to publish. It might be more sensible to publish another time. And in the interim… book a holiday. You might need it.

← Why NaNoWriMo Is Good For You
Be Afraid! It’s An Irish Writer’s Christmas →

25 comments for “Book Sales: What Happens When Blockbusters Flood The Market?”