To all and sundry* a big hello. Now that I’m back to blogging, but before I return to the nefarious narcissism of the Superblogger, I thought I’d interrupt that particular bile with my customary speciality – dubious writing advice.

In 2015, the restaurant critic and broadcaster Giles Coren made a programme for Sky Arts called “My Failed Novel”. In it, he explored the possible reason why a decade before, his one and only fiction novel, Winkler, failed in fairly spectacular fashion, both commercially and critically.

Because Coren is a minor celebrity in the UK, it meant he got to interview a lot of heavy hitters (the like of whom you might pay actual money to hear speak at a literary festival, for instance). Immediately I saw it, I thought: good grief, that’s jampacked full of advice and insight! I should put some of it into a blog post and share it, says I to myself. And it only took 2 years of it sitting on my telly box to actually do it.

So here it is – practical, helpful and realistic advice, divided into the 4 stages of the literary process known as Hope, Delusion, Stress and Despair (otherwise known as Writing, Publishing, Selling and Criticism).

And before you say it, none of this advice is coming from me, which is what makes it so excellent. If you don’t agree with some of it, don’t blame me.

1. The Beginning: Advice on Writing

1. Jeffrey Archer still does 14 drafts of every novel before submitting to his publisher. “You’ve got to put the work in… never be satisfied”.

2. David Mitchell said that there’s a difference between being a writer and an author. The writer sits in the back bedroom writing the book. The author launches it, and goes to literary festivals, and does the interviews, and signs the books. If you start to think of yourself as an author all the time, you’ve had it. The writer gets payoff while they’re actually writing the book, when the writing goes well.

4. Rose Tremain said you can teach people how to write better simply by recognising what they’re really good at, and what they’re not really good at – by bringing the former up, and making the latter go away. It’s editorial more than teaching. All you need to be a novelist is empathy, patience and imagination. 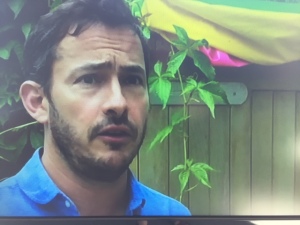 Giles Coren (not so happy)

2. The Middle: Advice on Publishing

5. Having a public or celebrity profile, such as Coren, will help you to publish a novel, but it won’t help you to sell one.

6. Rachel Johnson said success comes from familiarity, which explains the popularity of trilogies and series: “It’s all about long-form now. It’s not about the quick hit. People want the same thing over and over again. Don’t ever try and do anything new.”

7. Curtis Brown agents said some of the things which put them off straight away are easiest to avoid: starting off by saying “I know my book’s not very good but I was hoping you might look at it anyway”; sending queries to one agent addressed to another; and failure to follow basic rules e.g. capital letters at the beginning of names.

8. William Nicholson was already a hugely successful play, screenplay and YA fiction author when he got his 8th rejection for adult fiction. He says: “Successful books might be clumsily written, but they still come from something visceral and emotional deep inside the writer.” He believes that writing a novel takes maturity, and that writers hit their peak in their late 50s.

3. The End: Advice on Selling

9. Rachel Johnson said you do not write a book for money, because you won’t get it. Also, there’s no point to having a launch party. They’re expensive and ineffective.

10. Despite Coren being a famous restaurant critic and journalist, his first book only sold 771 copies, after he was paid an advance of £30,000. Jeffrey Archer’s first book sold 3,000 copies. He didn’t break through until book no. 3. (Cain & Abel).

11. Readers have to hear about a book 5 times before they buy it. Word of mouth is the singlemost important thing when selling a book.

12. Kate Mosse said that if you don’t win a prize or your book isn’t shortlisted for any, it might only stay on shelves for a maximum of 6 weeks.

4. The Aftermath: Advice on Criticism

13. Some traditionally published authors get no reviews at all.

15. Your worst critic might have thought they were making a joke.

16. When things go wrong, authors blame agents, publishers and readers. Never themselves. But Sebastian Faulks said if you write a good book, the readers will come.

17. Coren believes that ultimately his book failed not just because it wasn’t very good, but because he wrote it not for its own sake, but for the things he thought it would bring him.

*(Who is Sundry, anyway? Does he ever get invited to parties? I bet he brings terrible gifts. At the moment I feel like Superblogger is coming back next week, but time will tell.)

← 5 Things Which Might Get Your Mind Off Grief
Oh Nooooo! Someone Else Wrote My Book! →