I wrote the following piece for my Writing.ie blog a couple of weeks ago. I think we’ve all felt that sense of heart-sinking when we hear of someone else writing something extremely similar to our own work-in-progress – but what happens if someone else writes your opus maximus before you’ve even begun?

(In a gorgeous testament to the peculiar idiosyncrasies of Twitter, when this post was tweeted out by the Writing.ie folks, someone responded to the tweet: “Impossible. Either they plagiarized, or your story isn’t that original and you failed to put a unique spin on it.”  They then added helpfully “Remember: only the unique expression of an idea can be copyrighted, not the idea itself. The way you express an idea should be unique to you”. I don’t think they’ll mind being quoted here, as they’d have to read further that the headline to find out I’ve done so.)

Somebody is wrong on the INTERNET!!!!!!!

Oh Nooooo! Someone Else Wrote My Book!

Social media might have brought out the narcissist in us all, but it could be said that creative folk, such as writers, might be more than usually prone to the sort of solipsistic world-view where you’re utterly convinced that everything is about you.

How many times have you come across a particularly well-written article or essay, and thought “but those are my thoughts! This person has just published the contents of my head!”

Of course, anyone who has the ability to write something which makes you think it’s entirely your world view has to have a real talent. Still, someone else’s talent is also something that can quickly be forgotten with the aid of social media, so we’re completely and absolutely fine with that.

The Movie I Never Wrote

Still, I did get a terrible feeling of jealous dread recently upon watching the film Isn’t It Romantic on Netflix. “I should have written that!” I thought. “A parody of the romantic comedy genre – I mean, I practically wrote the book on that!”

The fact that I hadn’t written a rom-com parody screenplay, let alone the book, was no barrier to my sense of injustice. “How DARE a team of talented writers write a truly enjoyable movie which brilliantly satirises a popular genre!” I fumed. “Don’t they know that’s MY schtick??”

What it all boils down to, obviously, is the sense that someone pipped you to the post. And it happens all the time, with fiction. How many authors are idly browsing Amazon to check out their chosen genre, only to suddenly come across a book which is uncannily like their own?

It’s often said that there are only 7 basic types of story (or 4 or 5, depending on who’s written the book on it this time). Most of them have to do with very basic rise, fall, journey, death and rebirth themes, and admittedly, it’s very difficult to avoid any of those ideas when you’re writing.

It’s no wonder, then, that we sometimes feel like what we’re writing has been done before. It can be a dreadful moment, half way through our latest Opus Maximus, to feel like all our effort and sweat and toil has been a terrible waste of time. 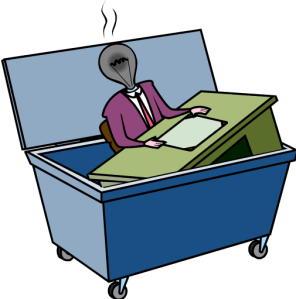 Imagine you got to that crucial point in your story, when Farquhar convinces Ermintrude he’s his own butler, a war veteran with a dubious angling history. You’re LOL-ing your writerly heart out, having finished the scene where he presents her with a large trout who reminds her of her grandmother, thinking “I’ll have them rolling in their wing-back library chairs with this one!”

Then you hop online to Amazon. A little demon in your head makes you search for the genre, “Romantic Thrillers – Mistaken Identities (Angling) – Grandmotherly Trouts”.

And there it is. The book – or 7 books – published before yours. Or the one in particular which, even without opening the first chapter, you just KNOW is going to be referred to in every single book review, newspaper round-up, and bestseller logline you have any hope of being mentioned in.

Just Because It’s Been Done Before, Doesn’t Mean It Can’t Be Done Better

What to do? Do you give up, and start another book immediately? Perhaps one where you don’t give in to your craven need to include tasty freshwater fish in every third scene?

Or do you continue on doggedly, firm in your resolve that the book/film/poem/performance art shopping list YOU write will be the best of the genre, the king of the plot, the example against which all future such stories will be benchmarked, the greatest of them all?

Could it be the Harry Potter to end all school stories? The Bourne Identity to beginning, middle and end all amnesiac spies? Or even the rom-com parody to end all rom-coms?

You know the answer to this, of course. You knew it before you even got halfway through this blog.

The moral of the story is: never ever ever (EVER) Google anything you’re writing, before you’ve finished it. And that’s how good ideas are born. I promise.

12 comments for “Oh Nooooo! Someone Else Wrote My Book!”