Over the course of the last couple of years spent crunching numbers for this blog, surfing dodgy creative social media and keeping my eyes open (in the darker hours) I’ve come to the conclusion that there are two pieces of advice all authors would do well to live by.

The first is to stay far away from tight undergarments. The second is never to trust a man called Gerald who tries to sell you a second-hand generator in a pub.

Just kidding. The advice relates to the publishing of fiction. I just needed to have a bit of fun before I whack readers in the face with some heavy-duty graphs. I’ve been going easy on you recently, with all that talking to my arse, not to mention tributes to hairy Irishmen, but all that has to stop now, for a bit of business.

Now read this advice very carefully, for I will only say it ad nauseum until I’m blue in the face saying it. It’s aimed at both traditionally published authors and self-published authors or indies: anyone who is not a best-selling author already, in fact.

And how are you supposed to know when it’s quiet, I hear nobody asking? Well, that’s where nerds like me come in. Below I have some lovely graphs which are all full of colours and sweet, glorious little numbers which show you what the big publishers already know: the times of year when people buy more books, and also, when sales tend to drop. Also, I have a few insights into when the big hitters released their books in the 12 months from June 2014 to May 2015. They didn’t just pick their launch dates at random. They had their reasons, and so should you (for avoiding them).

I referred to this before, in October 2014, when I only had 5 months’ data, but now it’s time to look over a full year of Nielsen Bookscan data, as published by the Sunday Times (UK). Back in What Time Of The Year Should You Publish Your Novel? I said:

Although the base data obviously only includes the top 10 bestsellers from each week (and is in itself far from perfect, given the issues still surrounding e-book sales data) the exercise still suffices for what I want to look at: Trends. Sales trends and outliers, to be precise.

The data sources are the same and the caveats unchanged, so on we go.

First, let’s look at those actual sales: a full year’s worth, this time. Greens are highs, reds are lows.

What does it all mean? As you can see glaring at you from the above (I changed those colours three times in an effort to make them prettier, so if you don’t like them, I won’t listen), hardback sales – i.e. blockbuster new releases – peaked in the pre-Christmas market, whereas average paperback sales peaked in June. Even though overall sales were higher in the months from October-December, people bought more paperbacks in June than any other month.

And why is that? Holidays, of course. Some people only read on holidays; some think they’ll read, and don’t; some always read, and double up on their break. It all means the same thing: overbuying, mostly.

What does that mean for you? People planning on publishing digitally should be taking advantage of the holiday market, and the sorts of people who don’t want to lug hardbacks around with them while they’re practising Camel Mindfulness in Bolivia.

Great! That’s my first million in the bag! Er, no. Big publishers know this. They knew before you did. Therefore, do not launch in June, because you’ll be ground into a pulp by the major blockbusters who will eat up all the headlines and pocket money. Launch in April or early May instead. And look at the quieter months: they are also a good time for indie authors to release – September, March and April in particular.

And furthermore: Keep up with the news. Read the Culture sections in the broadsheets. What’s the big release they’re all talking about? Avoid that launch week like the plague. Your dates can change, theirs won’t. You want to compete with that kind of noise, go right ahead. But don’t come crying to me when punters walk right past your triumphant book launch to buy something famous.

The following graph illustrates the overall numbers, with no split between paperbacks and hardbacks. And if you’ve been behaving yourself, and reading properly like I told you, they will back up all the things I just said. However, I am now going to blow your mind, by turning the theory on its head somewhat. 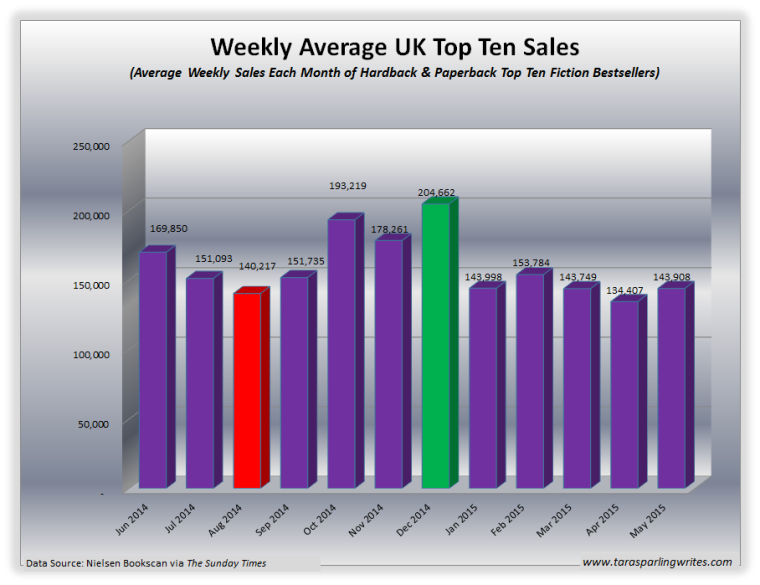 Here we see August 2014 was the quietest month over this period, but I wouldn’t recommend launching then either, because your friendly local journalist will generally be on holidays – psychologically if not physically. Your friends will also be away, and whatever you sacrifice, you absolutely cannot sacrifice their obligation to buy three copies of your book, plus one for the dog.

Conversely, December was the biggest month for book buying, but all the promotion for the biggies is usually done and dusted by November, which means there could actually be headspace for your marketing might. I did see some data which suggested that promotional activity taken up in late December got good results. Perhaps by the time the turkey’s carved, everyone is so sick of Christmas that they just want to curl up with a new book which didn’t have a bow on it.

So there you have it. If anyone has a real-life launching experience which could help or hinder any of these theories, speak now, or forever hold your purse.

And while we’re at it, if you like these numbers as much as I do, please vote for me in the Irish Blog Awards, which I covet most unwholesomely in 2 categories this year… voting is only open until September 21st, so time is running out. Vote for me in Best Art & Culture Blog here, and in Best Marketing & Communications Blog here. Thank you!

← Only You Can Save A Bunny From Certain Death. Please Vote
Death By EL James →