So you’ve published your book! Congratulations! All your hard work is now… beginning. 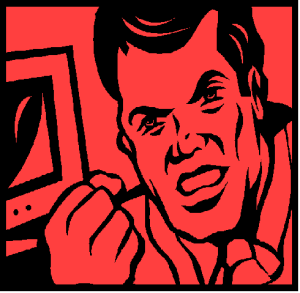 They told me all I had to do was write the damn thing… now you tell me 80% of the work is yet to be done?

That’s right, folks: it’s now time to sell your book. So roll back your sleeves, grab a sweatband, pull on the waders and let’s go into the murky waters of indie book advertising.

I got some lovely data from fantasy author and blogmate Nicholas C. Rossis, author of the dark epic fantasy Pearseus series featured in this data here. Nicholas has crunched some numbers beautifully in his own time – not least here, and here, and you should definitely go and have a look at them. Do that in a minute, though, once we’re done here, because seriously, folks, this data is only GORGEOUS.

Firstly, he had a comprehensive rundown of e-book advertising options which, although helpful, full of commentary and advice, mainly served to make me think…  how the hell is any author supposed to know which options to choose? This is worse than standing in a betting shop, five minutes before a race. You have money in your pocket, but a limited amount of time in which to select a guaranteed winner, and the odds are not in your favour.

Thankfully, Nicholas has already tried and tested some options, and he’s made the results available to us. Now, I am first and foremost a data nerd, so I have put some notes at the end full of caveats and disclaimers and all sorts of things which, if not firmly stated, might muddy all this lovely data, so you have been warned.

Firstly, let’s look at the November data, when Nicholas promoted one single title – Rise Of The Prince –the 1st in his Pearseus series, at a price of $0.99.

Here are the results. I’ve concentrated on 2 core metrics: the ratio of sales to advertising cost, and sales attributed to each advertising campaign.

First, let’s have a look at the cost of each ad campaign – some of which were run in tandem on certain days – in relation to the sales they actually pulled in. 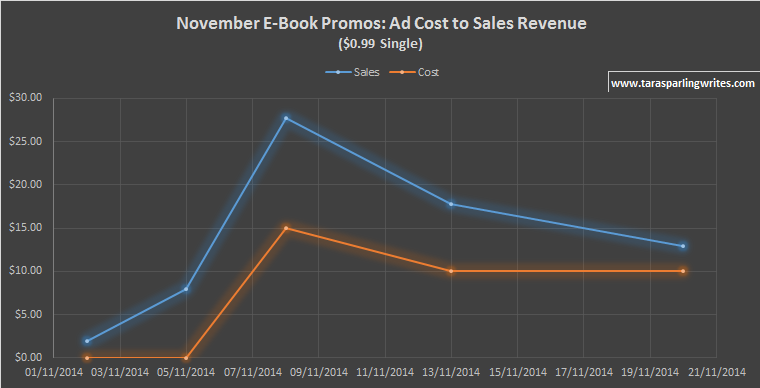 As you can see, there is a pattern in November: meaning that on this single title, when the ad spend went up, so did book sales. Also, book sales, the blue line, maintains a healthy level above the ad cost, which is the only result which really matters.

Next up, is the cost and sales per advertising channel. 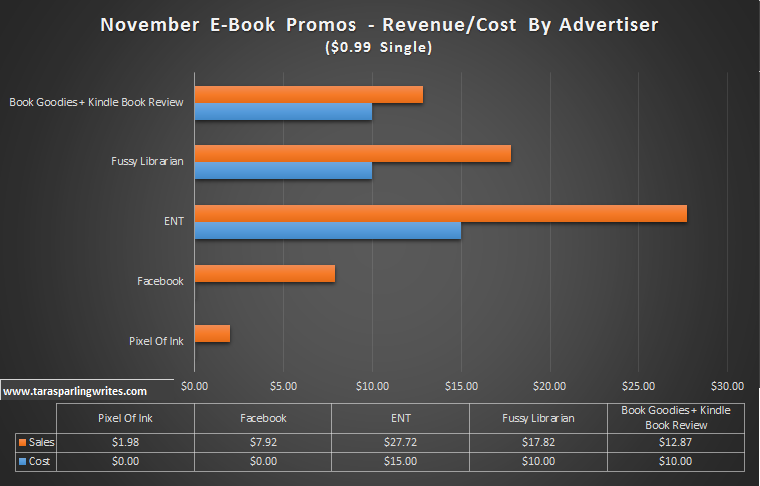 There’s a lot more data here, but broadly, the free marketing channels – Pixel of Ink and Facebook – pulled in some sales, where any revenue at all was a bonus. The other channels covered themselves, but in the case of Book Goodies and Kindle Book Review, only just. As both Book Goodies and Kindle Book Review were run on the same dates, we don’t know which one of them was the better – or indeed only – performer.

Next up was December 2014, when Nicholas changed his game, and promoted a bundle – all 3 books in the Pearseus series, at a price of $1.99. Although more expensive than the usual single-book promo, bundles always sell better, because readers are usually getting a better deal: in this case, one free book, on top of the already discounted single title rate.

My first thought on seeing this graph above was: All Bets Are Off. It doesn’t follow the November curve at all: revenues didn’t always outstrip the cost of the ads Nicholas ran. On December 7th, the ENT/Ebooksoda combo campaign made a loss, and on the 10th-13th, the Fussy Librarian/Kindle Book Review combo campaign lost out too.

However, as these dates were so close together, it’s tempting to conclude that perhaps an indie author shouldn’t try to advertise their books between the start of December and the weekend before Christmas (when his Book Gorilla campaign romped home with 80 unit sales).

See the cost and sales per advertiser as laid out below, but bear in mind that this might be date-dependent:

And so, although the sample size is tiny, making the science in this is so inexact as to damn near bring me out in a rash, I would make the following (hazy) conclusions:

1. Bundles sell better. If you have more than 1 book, or a series, market them together. Give your readers a good deal.

2. Spending on advertising in the first couple of weeks of December would not appear to be much use. Leave it until later on in the month, when early festivities have died down and people are already looking for diversion from their beloved families.

3. Spend carefully, and in small increments. BookBub may be the behemoth in e-Book waters, but if you don’t yet know what you’re doing, is it really worth laying out $800+ for such services when you’re starting off? (Especially if you don’t yet know how readers react to the thumbnail image of your book cover?)

4. If you have the time, and the inclination, run each ad campaign on a different date: it may make no difference to your sales, but it will allow you to judge how effective they are on an individual basis, so that you’re not throwing good money after bad  on future dates for lame ducks.

So there you have it. Tenuous conclusions drawn on a limited pool of information which is nevertheless full of, as I said, GORGEOUS data. Did I mention I was a nerd?

… *and now, the boring notes to the accounts… I did warn you

1. Data relates to Nicholas C. Rossis’ dark epic fantasy titles in the Pearseus series. This may not be your genre or market.
2. Some promotions were run on the same day or days and therefore are grouped together, meaning their results are mixed together.
3. These results are from one point in time. A promotion run in March may have a very different outcome than one in November or July. Test these waters carefully.

← The XYZ of Blogging, Or What It All Boils Down To In The End
Take the 3-Question Ad Results Survey →