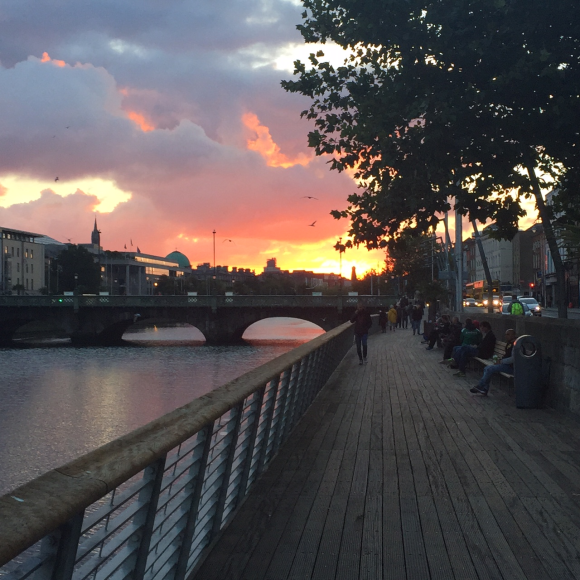 Ireland’s capital city blossomed unseasonably in autumnal light. A more appreciative audience might have found it quite fetching. But inside Tark and Mara Towers, a two-hundred year old Japanese Maple bonsai dropped colour bombs all over the undocumented Greek marble floors of its twelfth-storey penthome, unnoticed by its lord and mistress, who were busy plotting. Against everything. And everyone.

“You see, that would never have been acceptable in 2007.”

“Not even then, my poisonous petit-four. That’s true. All this nonsense only came later.”

Husband and wife were pondering the global chatter regarding Ireland’s precarious position in the event of a British departure from the European Union. They had long ceased voicing their concerns about the future cost of dining in London whenever the whim overcame them; that had been resolved with a plan to dine in Paris whenever the whim overcame them instead. Mara had rechristened her erstwhile favourite festival as London Fashion So-Last-Week, and transferred her sartorial patronage to Berlin, in a move as haute as it was couture. They hadn’t yet decided what to do with Mara’s collection of antique royalist bath toys, but even a disunited kingdom wasn’t burned in a day.

Their current bugbear was a raft of international news headlines indicating that Ireland was hilarious altogether, for thinking it might bid for business that might see itself exeunting a Brexited Britain. They did not take kindly to their homeland being so denigrated in the press. After all, that was their job.

The financial crisis had been a resounding success for the pair. In true super-rich fashion, Tark’s individual wealth had increased with every uptick in Ireland’s debt-to-GDP ratio. Mara had long past stopped bothering to keep tabs on her personal wealth. When you make €228,765 a day in royalties from being one of only four authors in Europe earning a living, thanks to your domination of the celebrity baking crime genre, nobody really notices if you’re miscalculating seed capital by a few billion.

“It didn’t bother me before,” said Tark. “All that condescension for being a good little country and doing what we were told.”

“Well, of course not, darling. How else would you have concealed everything you were doing without being told?”

“Exactly, my toxic turtledove. Or indeed what I was doing without being tolled. But it occurred to me this morning that a damaged nation could be detrimental to our finances. We can’t afford to be tarnished by a laughing stock.”

“I don’t quite follow. How is the foreign press making fun of Ireland financially bad for us?”

Tark stood to his full height, such that it was, and clasped his hands behind his back, his head brushing the underside of the bonsai’s red-and-orange canopy. He had his thinking face on, which meant he was only one skeptical thought away from shooting lightning bolts from his demonic eyebrows.

“Our fortunes are more closely aligned than we think,” he said.

Mara nodded, her frozen forehead narrowing into an infinitesimal expression of quizzicality. She angled her head to one of her cold shoulders for emphasis, resplendent in its cut-out structured military sheath.  “And yet,” she said, “we both know that the safest way to conceal success is to hide it behind a veneer of Irish pessimism and acceptance.”

“You always did say, there is no better disguise than the cap in the hand,” said Tark. “Hmmmm.”

Tark inhaled sharply, signifying that a cunning plan was within reach. “That’s it, my petrified sugar plum! Stereotypes. We have so many of them.”

Tark peered up through the bonsai canopy to the Venetian glass skylight above. “Isn’t it about time somebody monetised them?”

Mara wafted over to her husband and laid her hand on his arm, blood pulsing through the lucky channels in her arm which were allowed entry to her heart. “What are you proposing, my love?”

“Well, my lethal little lark, with so many instantly recognisable Irish stereotypes, it seems to me they would benefit from being privately patented.”

Tark acknowledged his wife’s reaction with his version of a smirk, which doesn’t bear description during daylight hours, or in the presence of small children. “From now on, being Irish won’t be a character trait. It’ll be a commodity. One that only I may license and distribute.”

“But my lucrative Lothario! How could we possibly police it? On a national scale, let alone a global one?”

Tark whipped his 24-carat gold laptop out from under the lid of the baby grand piano; he pressed three keys with a flourish and it obligingly displayed a spreadsheet with pre-loaded currency symbols. “It’s about watching the right people, not prosecuting the wrong ones. Anyone within the island of Ireland – which obviously excludes tax exiles, or anyone with a net worth under our daily spend on personal assistants – isn’t worth suing. Ditto Eurozone peasants, citizens of Scandinavia, or reality TV stars outside certain designated areas of Los Angeles.”

He typed a number followed by a shedload of zeros and shut the laptop with a flourish. “But the very moment a Russian oligarch gets drunk–”

“Or a property developer gives a completion date which can’t possibly be met!” finished Mara.

“I’ll be there,” said Tark, circling his wife’s waist with his hands. “Lawyers at the ready. The jaws of our coffers open and ready to inhale damages.”

“Oh Tark.” Mara sighed in languid ecstasy. “Every day I think I couldn’t possibly love you more. But then you go and double our money.”

Apparently WordPress have been running ads here which some readers may find offensive. I have no control over it, so I can only suggest that you boycott whatever’s being touted without my (or your) consent.

← What’s Happening To Free Internet Content?
Why You Should Never Live With A Character From A Young Adult Novel →