So I wasn’t expecting that! (Obviously, or I never would have promised you a photograph.) But I won the award for Best Newcomer at the Blog Awards last night. And I’m so delighted I don’t even mind jeopardising everything I hold dear now, by showing you just how seriously I took the 1980s fancy dress theme.

It was marginally funny earlier when I realised that at least 50% of the people in the room had possibly never even heard of Dynasty, Dallas, or anything else involving Grade A shoulder pad abuse.

Which meant that they thought I dressed like this normally. Although you’d think hair big enough to invade a small country and the texture of candyfloss might suggest otherwise. And that’s even before you even register the horror of a pastel pink power suit. Thank God for the dazzling compère, Bunny, who was channelling much the same thing and shouting Joan Collins before I even got to the stage.

I swear this outfit happened on purpose

And here I am later, with an award, a massive smile on my face and a lovely spouse to inject a bit of levity into the photograph. 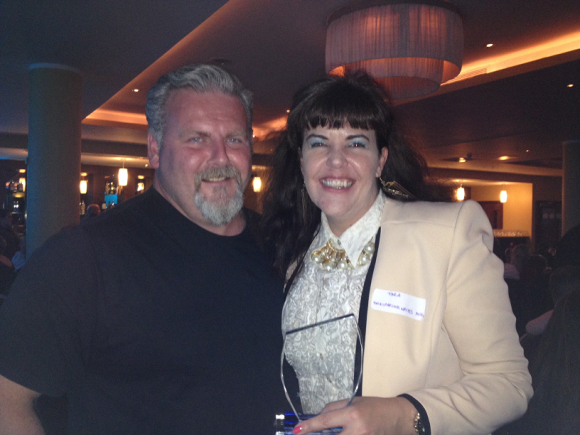 No flashes were harmed in the making of this picture

Thank you to Lorna Sixsmith and Amanda Webb who put enormous energy and expertise into organising the 2014 awards and put on a bloody fabulous show for everyone last night to boot.

And a humongous thank you to everyone here for their messages, votes, laughs, comments, shares, tweets, e-mails, visits, and interaction in general. My first steps into blogging have turned into an utter joyride (not in the 1980s Dubin meaning of the word obviously) and more fun than popping bubble wrap in a champagne-filled Jacuzzi.

And just one word of warning. I think I saw Tark and Mara at another table last night. They may have their own take on the awards… oh dear.

75 comments for “I WON AT THE BLOG AWARDS! And, um, this outfit happened”